Montclair, NJ (02/24/2022) — Salt pollution in freshwater ecosystems is increasing worldwide, and existing water quality regulations are not doing enough to address the issue, scientists have found.

Montclair State University Assistant Professor of Biology Matthew Schuler is among a group of scientists across North America and Europe to collaborate on a study organized through the Global Lake Ecological Observatory Network (GLEON) and published in the journal Proceedings of the National Academy of Sciences.

The findings show that lake ecosystems are being negatively affected due to significant damage from salt pollution caused by the over application of road de-icing salts, improper agricultural practices and mining operations. They also suggest that ecological damage to lakes can occur "at salt concentrations below ranges government regulators have deemed safe and protective of freshwater organisms."

Schuler was one of the original contributing designers of this study, based on multiple projects that he and collaborators completed in 2017 showing that zooplankton are being negatively affected by increased road salt pollution in different aquatic environments. To better understand the broad implications of road salt pollution, collaborating labs from around the world worked together to conduct the same experiment using different lake water and different communities of zooplankton.

"If the concentration of salt in lakes continues to increase, there could be strong negative effects on freshwater environments that cascade through the entire food web, affecting every organism from phytoplankton to fish," says Schuler.

Results from Schuler's original research showed that zooplankton populations decline when salt concentrations increase, but the exact threshold that caused significant zooplankton decline was difficult to determine from single-site studies.

Zooplankton are a critical food resource for many young fish and help keep water clear by consuming floating algae called phytoplankton. Results from this study show that increasing salinity caused a reduction in zooplankton populations, often at concentrations below secondary government recommended limits. The reduction in zooplankton resulted in an algal bloom at almost half of the participating sites because the phytoplankton populations were not being consumed by zooplankton. This means that rising salinity could alter nutrient cycling, reduce water quality and clarity, and result in a trophic cascade that negatively affects economically important fish species.

Researchers say the results indicate a major threat to the biodiversity and functioning of freshwater ecosystems and the urgency for governments to reassess current threshold concentrations to protect lakes from salinization sparked by sodium chloride, one of the most common salt types leading to the salinization of freshwater lakes.

Schuler pointed to some solutions that could help reduce road salt pollution, including smart-edge plows and pre-brining, both of which are used in New Jersey. "State and federal governments should fund and provide support for road management facilities to upgrade their machinery and help educate private landowners who apply salt to their driveways, sidewalks and parking lots," says Schuler. "By limiting the amount of salt applied to roads and other impervious surfaces, we can help reduce the negative impacts that salts can have on freshwater ecosystems."

Montclair State University is a research doctoral institution ranked in the top tier of national universities. Building on a distinguished history dating back to 1908, the University today has 10 colleges and schools that serve 21,000 undergraduate and graduate students with more than 300 doctoral, master's and baccalaureate programs. Situated on a beautiful, 252-acre suburban campus just 12 miles from New York City, Montclair State delivers the instructional and research resources of a large public university in a supportive, sophisticated and diverse academic environment. 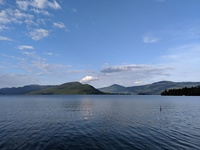 Water and zooplankton communities from Lake George were used for part of the experiment. Credit: Dr. Matthew Schuler 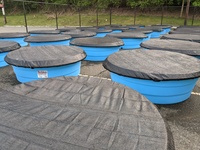 These experimental tanks (called mesocosms) are similar to the ones used in the experiments for this study. Credit: Dr. Matthew Schuler